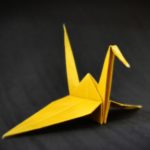 The new teacher arrived in the town with a belief in the educational benefits of paper folding: she had written a pamphlet for other educators entitled ‘The Place of Origami in the Classroom.’ One afternoon a week she taught her pupils basic designs and demonstrated more complex constructions. What really added fuel to their spark of interest was her collection of animals, birds and abstract shapes, built up over many years and kept in a specially constructed display cabinet mounted beside the coat hangers. Once the children had mastered the fundamental models and folds, inspired by the treasures from Japan, India and an unpronounceable place, they began to evolve designs and styles of their own.

In no time an origami craze engulfed the town. Extra supplies of multi-coloured and textured sheets of square papers were ordered through the local shop. The children also used paper they found in their own homes — shopping lists, music sheets, bills, receipts, old calendars, love letters, cigarette cards, seed catalogues. The fad seeped out into other aspects of town life. Just one example: the forge fashioned square frames that could sit inside a frying pan or on a griddle. This created a perfect receptacle for pouring batter. Skilled children would then fold the square pancake into a variety of shapes to be filled with fruit and cream.

Mrs. Deere, mother of Daniel, the most talented of the children in this speciality, introduced the origami pancake onto the local fountain card circuit. Fountain cards was a game requiring steady hands, a sense of proportion and three decks of cards with the sevens and jacks stripped. This game had all but completely died out, perhaps due to the arrival of a knife factory in the town and its detrimental impact on the manual dexterity of the population. Mrs. Deere was not a skilled fountain card player but Daniel’s creations, shaped like flowers and towers with sweet and savoury centres added an extra dimension to her Thursday night game. As Mrs. Peyton said, washing down a pancake swan with some mint tea, `God spent a long day dreaming up talents of an inconsequential and frivolous nature to distribute to those who missed the main go-around.’

All this would have passed, perhaps not even lasted as a memory, all these frivolous and inconsequential goings-on, but for an incident involving a boy named Bishop who lived some distance outside the town, formerly a miniaturist and now the only known paper vanisher.

Constructionists and miniaturists: a split in the ranks of origami makers. For the miniaturist the challenge existed in the realm of creating something tiny and perfect, a design fit for a pencil, a match or a knitting needle. Apparently an eight-year-old girl was on the edge of a breakthrough, folding a bee’s wing into her signature frog to fit on the head of a pin. For the constructionists a different challenge existed — designing larger and more complex structures and using in some cases non-paper materials. It was acknowledged that the Peyton’ daughter, Casen, was head and shoulders above all others. She was perhaps the only one with the vision and skills to reunite the two schools, but was blighted by her parents’ ambition for her in the realm of tapestry weaving, a proud family tradition.

Left to his own devices on a Saturday afternoon, Bishop had run out of craft paper and wished to practise a sleeping cat design. Having exhausted all other supplies in the house, he picked out an old letter that was on top of photographs and documents kept in a shoebox in his mother’s wardrobe, took it to his room and began folding. If all had gone to plan, he would have replaced the paper and his mother would be none the wiser. Absently, whilst warming up his fingers he folded the paper in half eight times, the maximum number of folds a square of paper could take, irrespective of size. He squeezed the tiny paper one more time, willing it to halve again and the impossible happened. The paper completely disappeared from between his thumb and first finger. It folded into nothing.

1) to get benefits from paper folding.
2) to use paper folding for educating children.
3) to make origami more popular with children.
4) to teach educators to use origami in the classroom.

13 The new teacher kept her collection of animals, birds and abstract shapes in

1) a wardrobe.
2) a special box placed beside the coat hangers.
3) a specially equipped room.
4) a special piece of furniture.

16 Casen could have reunited the two schools unless

1) her parents had prevented her from doing this.
2) she had wanted to follow the family tradition in tapestry weaving.
3) she had been head and shoulders above all others.
4) she had had the vision and skills.

1) it was easy to find.
2) he was exhausted by looking for other supplies in the house
3) of a total lack of paper.
4) no other craft paper suited for his sleeping cat design.

18 The paper completely disappeared because

1) it was too old for origami.
2) Bishop was inattentive.
3) Bishop had folded the paper in half eight times.
4) it was Bishop’s plan. 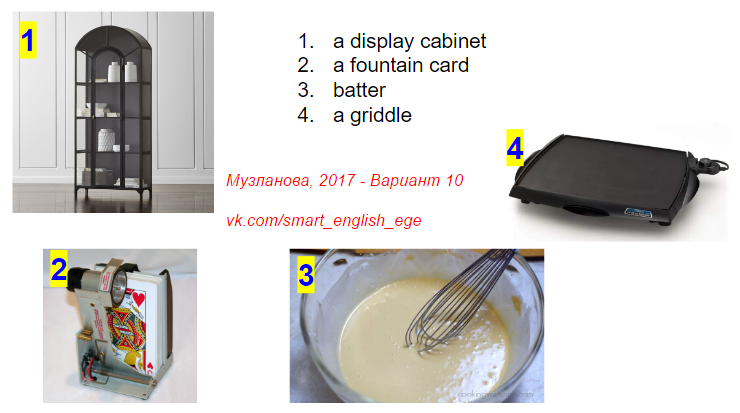