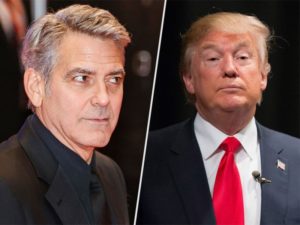 Here is George Clooney’s response* after Trump accused him of being a “Hollywood elite [ɪ’liːt].” “Here’s the thing:

I grew up in Kentucky. I sold insurance door-to-door. I sold ladies’ shoes. I worked at an all-night liquor [‘lɪkə] store. I would buy suits that were too big and too long and cut the bottom of the pants off to make ties so I’d have a tie to go on job interviews. I grew up understanding what it was like to not have health insurance for eight years.

So this idea that I’m somehow the “Hollywood elite” and this guy who takes a shit in a gold toilet is somehow the man of the people is laughable.

People in Hollywood, for the most part, are people from the Midwest who moved to Hollywood to have a career. So this idea of “coastal elites” living in a bubble is ridiculous**. Who lives in a bigger bubble?

He lives in a gold tower and has twelve people in his company. He doesn’t run a corporation of hundreds of thousands of people he employs and takes care of. He ran a company of twelve people!

When you direct a film you have seven different unions all wanting different things, you have to find consensus with all of them, and you have to get them moving in the same direction. 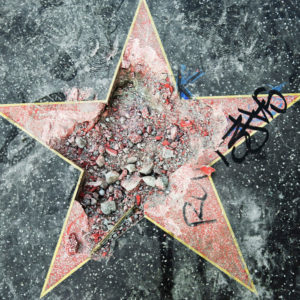 Donald Trump’s star on the Hollywood Walk of Fame

By the way, Donald Trump does have a star. However, his star on the Hollywood Walk of Fame is now little hole in the ground with a pile of pink dust and rocks around it. You can see a picture of it on the right>>>

phrasal verbs – I’m looking for you.
idioms – I was losing, but then I managed to turn the tables
linkers – Firstly, I’d like to confess.
collocations – a run-down hotel
new single words – Meat is a staple of any diet.