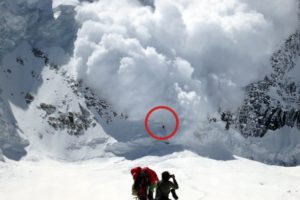 Surviving an avalanche was not on Thomas’s list of things to do in life. A thrill-seeker of epic proportions, he had jumped from a helicopter to ski remote mountain dopes and traversed half of Antarctica on a cross-country skiing adventure. If only his wisdom of doing things in packs hadn’t failed him on the day of his accident.

He had ventured out alone before, and in any case, most of the ski ranges around his mountain home were littered with forest rangers whose job was to help stranded hikers. So a solo trip by an experienced skier wasn’t the most dangerous of adventures.

Every seasoned skier is aware of both the risks and the joys involved with skiing off-piste. It’s a different experience from the snow that’s been packed down into hard ice by the hundreds of other skiers who have already crossed over it. Movements occur almost in slow-motion as the skier glides in and out of the piles of powder. It’s an exhausting challenge that requires effort from the skier’s whole body, but a unique one that hooks a skier after just one run.

Thomas even had special equipment for this particular type of skiing. His well-worn pair of traditional skis wouldn’t be sufficient, so he’d expended an extra two hundred pounds on a wider set of blades especially made for skiing in powder.

And it wasn’t as if safety was the last thing on his mind. He’d brought his avalanche kit in case of emergencies. He wore an airbag that would help to keep him near the surface if he pulled the cord in time, and another device which would assist him with breathing under snow. The rescue service’s number was programmed into his mobile phone, and his avalanche transceiver – which emits an emergency signal – was equipped with fully-charged batteries.

Thomas’s run that day was in familiar territory. He had always skied with a trusted ski buddy, with never an incident to report. Perhaps he had been lulled into a false sense of security. In fact, he had intended to ski with a friend that morning. When his friend couldn’t make it, Thomas considered not going himself, but the snow on the mountain had fallen just the night before, and the lure was too intense.

His run was a wide, bare track of slope nestled between two pine forests – a real skier’s delight, and quite popular with the locals as well.

They say an avalanche is like a sleeping giant, waiting to be woken up by even the slightest of nudges. Thomas gave this giant more than a nudge – he skied right over it and before he knew it, he was skiing on top of it as it slid down the mountain along with him. And if you ski on top of the giant’s mouth, it’s likely to swallow you whole.

As Thomas sank beneath powder, through his acute panic he managed to pull the cord on his airbag. The roar of the giant fell silent seconds later, and from beneath the snow it was as if morning had turned to night. Thomas tried to reach his phone, but his arm might as well have been cast in concrete. Lying still, his panic slowly shifting to an eerie peacefulness, he did his best to keep his chin up. He even began to enjoy the dark solitude, even though he knew he might never be found. Luckily for him, the giant had caught the attention of others, and the transceiver was doing the job it was designed to do.

12 What are the ‘packs that the author refers to in the first paragraph?

13 Why didn’t Thomas think his solo ski run would be very risky?

1) There were personnel to help in case of trouble.

2) He wasn’t aware of the potential dangers.

3) He had been on more dangerous ski adventures.

4) He believed powder to be easier to ski on than packed ice.

14 Skiers who ski on powder for the first time …

1) often never do it again.

3) fall in love with the experience.

4) often get stuck in the snow.

15 What is true about Thomas’s avalanche kit?

1) The airbag would help him breathe.

2) The airbag would inflate automatically.

3) He had an emergency number written down.

16 Why did Thomas particularly want to ski that day?

1) It was pre-arranged with his friend.

3) The area was beautiful.

4) The weather conditions were ideal.

17 An avalanche is compared to a sleeping giant became …

2) it can quickly spring into life.

4) it can easily kill people.